This is collection of clips from lecture on the nature of the Universe at the Zen Center Regensburg in 2018.

A series of clips created from the 4 talks are online 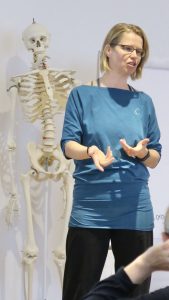 Dr. Bosler has given many public talks on a spectrum of topics in astrophysics, and through experience, she also began to see that subject of the Universe and its nature touched people deeply. The  inspiration for these seminars comes out of an interest in nurturing the connections people find in their heart-minds when they reflect on the vastness of the Universe.

Tammy is a passionate advocate for science and critical thinking. She received her PhD in physics at the University of California Irvine (UCI) in 2004 where she was the first person in the University’s history to obtain a doctorate on the topic of astronomy.  In addition to her research, she led a program for public outreach and education in astronomy, reaching thousands of adults and children in her community in the she led the program.   She has worked at the National Academies of Science and at the National Science Foundation, both in Washington D.C., supporting the U.S. ground-based astronomy program and science policy in the U.S. government.

In the same year she started her PhD, she also started practicing Yoga in the tradition of TKV Desikachar and T. Krishnamacharya with her first Yoga teacher, Juris Zinbergs, at UCI.  Throughout her academic and science policy careers, she continued to study Yoga under the guidance of the American Viniyoga Instituteand Gary Kraftsow, teach and support people with individual therapeutic sessions.  In the past ten years, she has shifted her focus almost exclusively towards Yoga study and teaching.  In addition to teaching group and private lessons locally, she has created an online Sangha program with her teacher Mirka Kraftsow and developed YogaDigital, an iOS app with practices, chanting, and guided relaxation exercises in collaborations with some fo her colleagues.

This site uses Akismet to reduce spam. Learn how your comment data is processed.